Following months of negotiations between heads of state and diplomatic teams at the Paris Peace Conference of 1919, the First World War was formally concluded on June 28, 1919 with the signing of the Treaty of Versailles.

For Canada, having representation at the Paris Peace Conference and signing the Treaty of Versailles was vitally important; Prime Minister Borden campaigned hard for this inclusion. As he stated in Parliament:

On behalf of my country I stood firmly upon this solid ground; that in this, the greatest of all wars, in which the world’s liberty, the world’s justice, in short the world’s future destiny were at stake, Canada had led the democracies of both the American continents. Her resolve had given inspiration, her sacrifices had been conspicuous, her effort was unabated to the end. The same indomitable spirit which made her capable of that effort and sacrifice made her equally incapable of accepting at the Peace Conference, in the League of Nations, or elsewhere, a status inferior to that accorded to nations less advanced in their development, less amply endowed in wealth, resources, and population, no more complete in their sovereignty and far less conspicuous in their sacrifice.

Canada signed the Treaty independently, but the signature was indented under “British Empire”. While this did reflect the continued ambiguity of Canada and the other dominions’ role in the world, it did represent a significant step for Canada gaining full independence over its foreign policy. Twelve years later, the Statute of Westminster (1931) granted Canada the ability to determine its own external affairs. The international recognition Canada received was due in no small measure to the sacrifices of its armed forces throughout the First World War.

An independent foreign policy meant that Canada would no longer be obliged to enter a war because of its relationship with England – as it had in August 1914. Future wars would only be entered with the consent of Parliament. Consequently, with the start of the Second World War, when England declared war on Germany Sept. 3, 1939, Canada was not obligated to follow England’s lead and entered the war Sept. 10, 1939, after a vote in the House of Commons.

After the Treaty had been signed in June 1919, a special session of Parliament was summoned on September 1, 1919 for the Treaty to be ratified in Canada. During this special session, Prime Minister Borden spoke about the agreement of all countries to the terms of the Treaty:

I do not claim that there was no hesitation, or even that there was no protest. Probably there was not a single nation whose representatives were absolutely satisfied with every disposition contained in that Treaty. I do not except the representatives from Canada from that sweeping assertion. But there was the great outstanding fact that thirty-two nations of varying and sometimes conflicting ideals and aspirations, widely divergent in status, in power, and in political development, and separated sometimes by ancient antagonisms and long-standing jealousies, did finally give their undivided assent to a Treaty, which whatever its imperfections may be, was designed in all sincerity to assure the future peace of the world.

Despite Borden’s claims above, the terms were not without controversy. The treaty required Germany to disarm, make ample territorial concessions, and pay reparations, along with accepting responsibility for having caused all the loss and damage during the war. Some felt that these terms were overly harsh; others were critical that it was too lenient. Many would argue that the that the terms imposed by the treaty created the conditions that would lead to the unrest in Germany and outbreak of the Second World War in 1939 – the exact opposite of the intentions of those involved in the treaty’s creation. 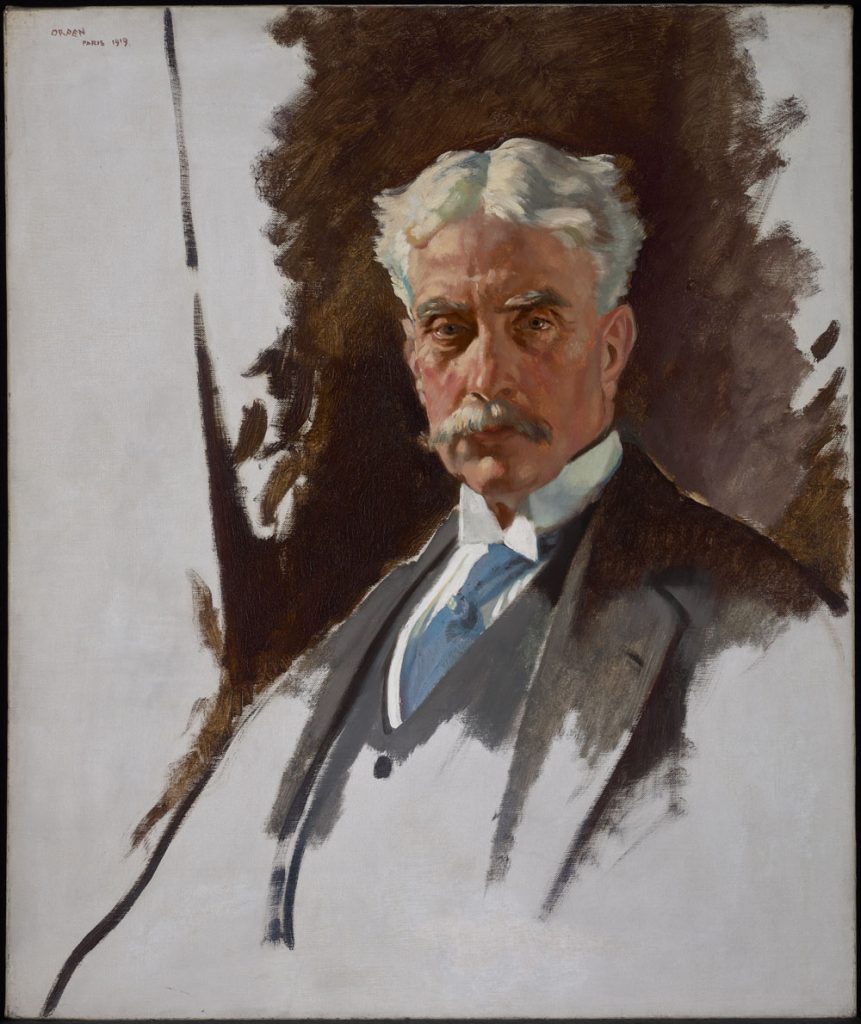 From Library and Archives Canada: “This portrait of Sir Robert Laird Borden (1854-1937), Canada’s ninth prime minister, was painted by Sir William Orpen (1878-1931) during the Paris Peace Conference of 1919. Orpen had been commissioned by the British Government to produce a commemorative work of the historic event. As did other delegates, Borden sat for an individual sketch which later served as a model for the Prime Minister’s portrait in a large group portrait of conference delegates at the event. The finished group portrait, A Peace Conference at the Quai d’Orsay, now hangs in the Imperial War Museum in London. This unique portrait of Sir Robert Borden was produced during one of the four occasions on which the prime minister sat for Orpen, and reflects the prime minister’s fragile state of health, the demands of the previous months putting him at the brink of physical and emotional collapse.”

“Canada and the Peace: A Speech by Robert Laird Borden on the Treaty of Peace,” (Ottawa: 1919). https://wartimecanada.ca/document/world-war-i/peace/canada-and-versailles-treaty