** There are still ongoing opportunities to be involved in supporting the Vimy Foundation Centennial Park. A very limited number of Centennial Trees (Vimy Oaks) are still available. Scroll down for more information on the various ways you can support this living memorial.** 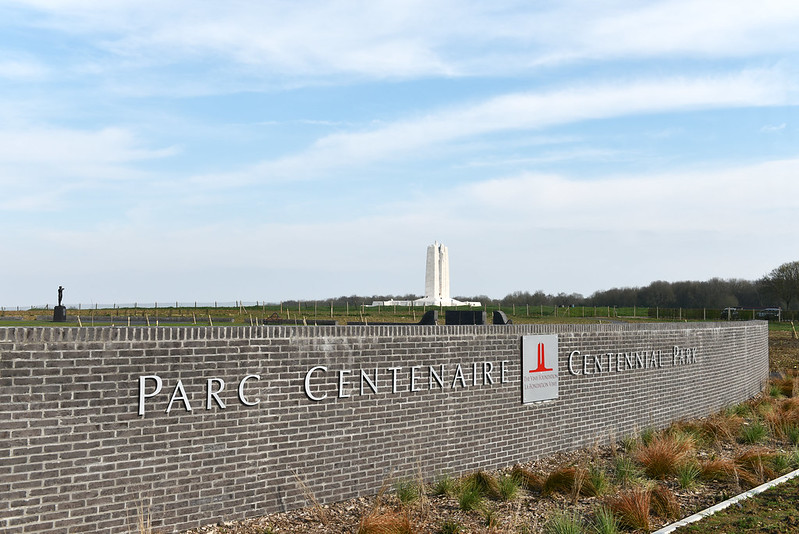 The Vimy Foundation Centennial Park is designed as a place for reflection about the role Canada played in the First World War and an opportunity to honour the Great War generation. All elements of the park have been carefully chosen. Design by Linda Dicaire, Landscape Architect. 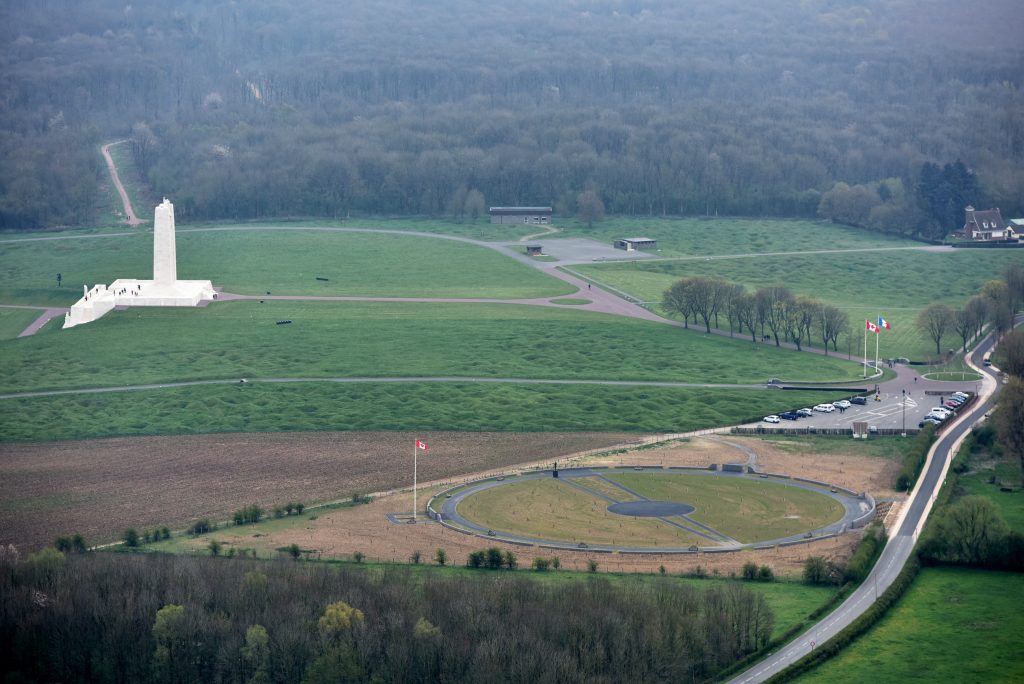 The Centennial Park features 100 Centennial Trees dedicated to Canadians. The repatriated Vimy Oaks (Read more about the Vimy Oaks here) commemorate the living spirit of those who fought and testify to the intimate relationship between people and nature even in the most tragic circumstances. The four rows of trees in the centre circle commemorate the four Canadian divisions that participated in the battle in 1917.

Each Centennial Tree is available for $10,000 and will feature the donor’s name on the Centennial Park plaque. Proceeds will support Vimy Centennial Park and education programs of the Vimy Foundation. *Limited number of Centennial trees remain* 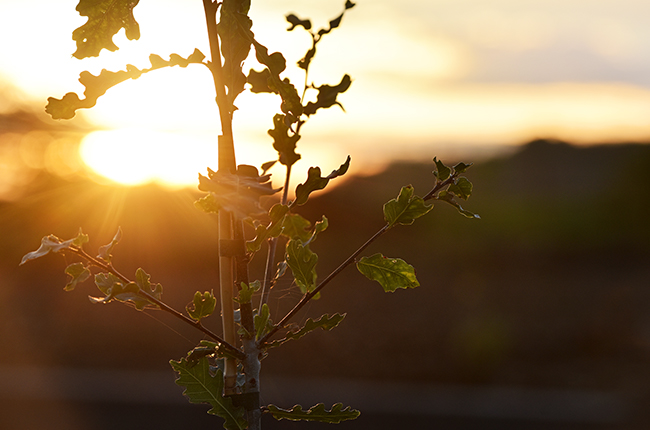 On October 29, 2018, French children from the nearby town of Givenchy-en-Gohelle assisted with the planting of the Vimy Oaks at the Vimy Foundation Centennial Park. Thank you for your help! Click here to view the photos.

THE RIDGE: TO VENERATE A BURIED HISTORY

The Vimy Foundation, to commemorate the legacy of the Battle of Vimy Ridge, created The Ridge: To Venerate A Buried History. This water feature was commissioned after a competition with entrants from Canada’s leading design universities. The winning team combined the talents of three Thesis Level Masters of Architecture students from Carleton University: Scott Normand, Kevin Complido, and Brendan Dyck. In their proposal, the team states:

The intention driving the project is for this theoretical interaction to be tranquil and thought-provoking and for it to reinforce the dialogue of peace and remembrance. 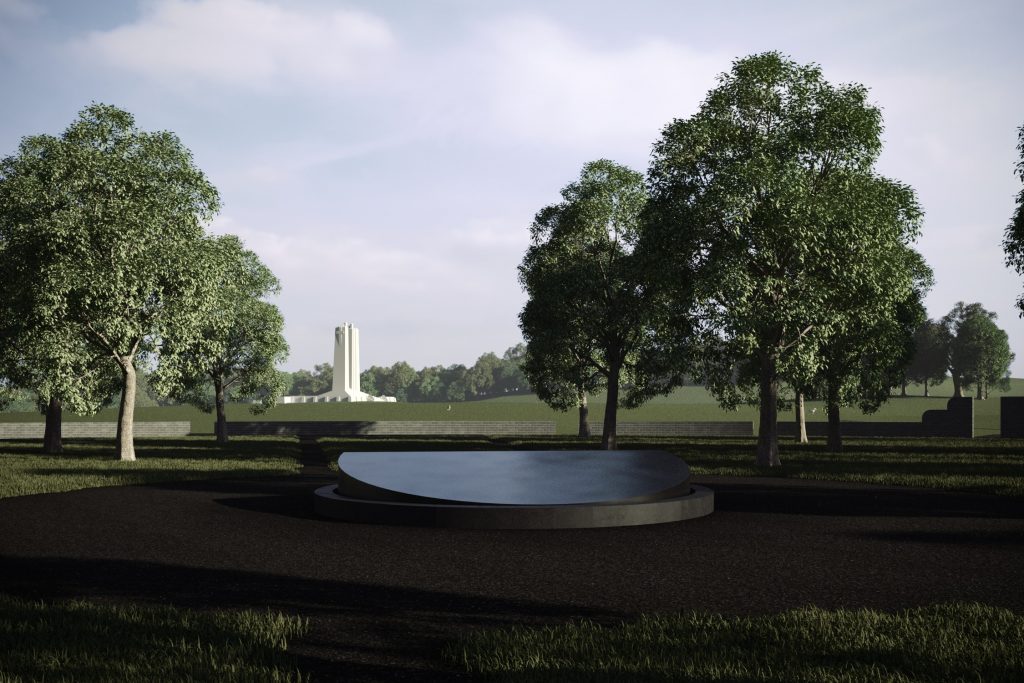 The paths through the Centennial Park create a unique perspective of the Vimy Memorial, surrounded by Vimy Oaks. Centennial benches, placed throughout the park, provide an opportunity for gathering, dialogue, and extended reflection, all essential elements to conflict resolution and peace that the monument inspires. Scroll down for the list of Centennial Bench donors. Proceeds will support Vimy Centennial Park and education programs of the Vimy Foundation. 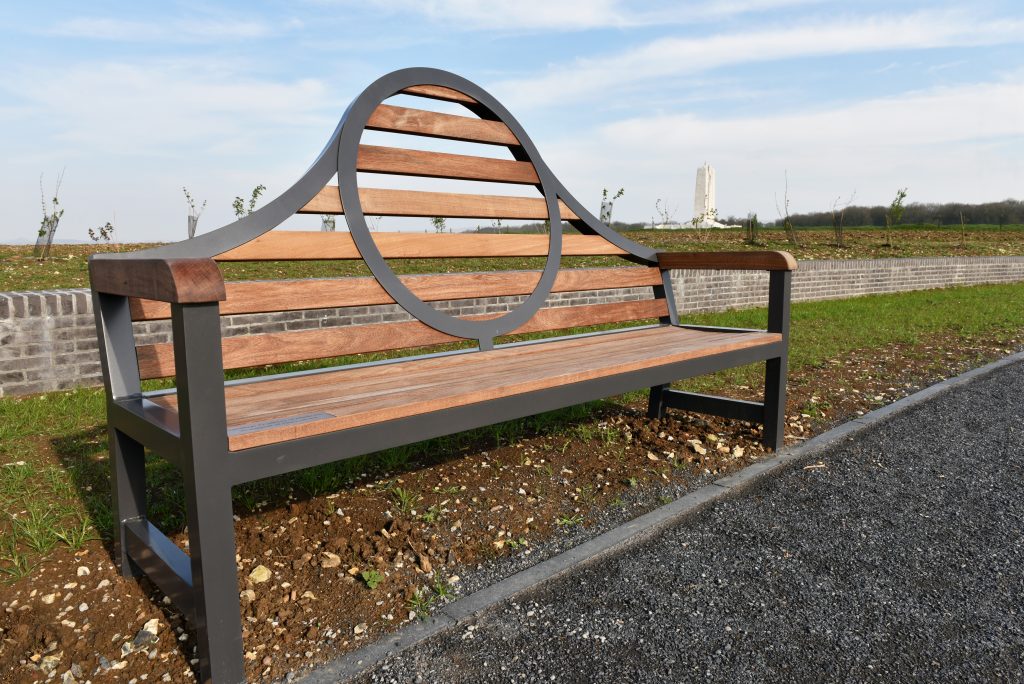 Camp Borden was founded in 1916, training nearly fifty thousand soldiers for service in The Canadian Expeditionary Force. For many of those soldiers, their first action was during the Battle of Arras, and specifically the Battle of Vimy Ridge. The Memorial Sculpture of the Bugler is generously provided by CFB Borden. The Memorial Sculpture of the Bugler, designed by the Canadian artist Marlene Hilton Moore, invites visitors to reflect on moments one hundred years earlier, as the bugle call rang out at the dawn of morning of April 9, 1917, and again on November 11, 1918 at the beginning of peace. A twin Bugler is installed at CFB Borden in the Borden Legacy Park, calling to the now-empty trenches that once trained soldiers before they left for battle overseas.  Read more about the Borden Legacy Park here, created for the centennial anniversary of the establishment of Base Borden. 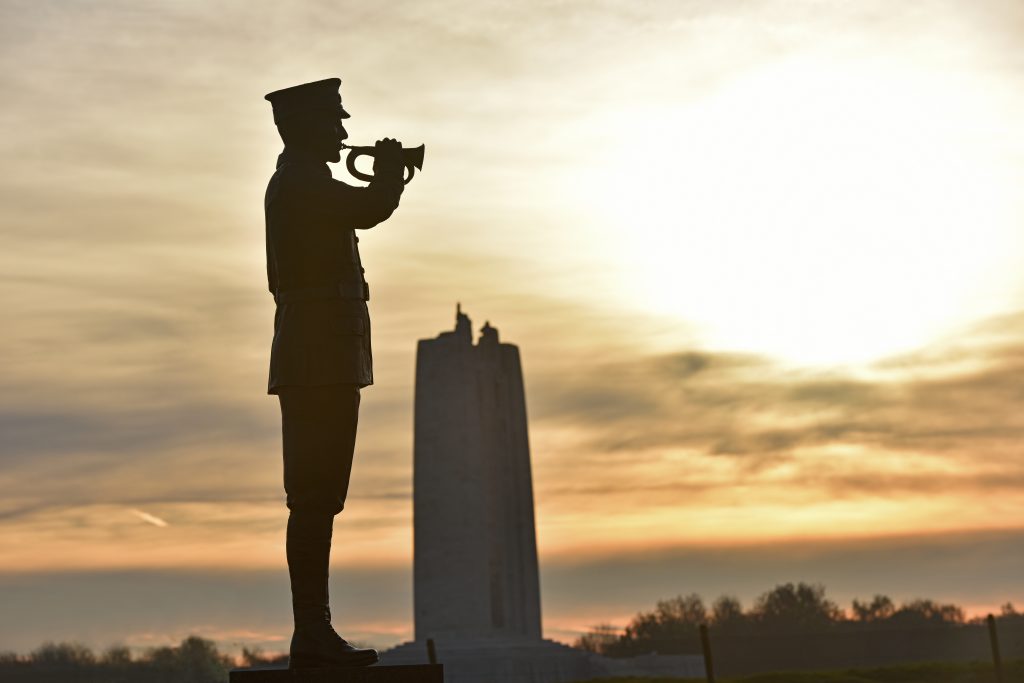 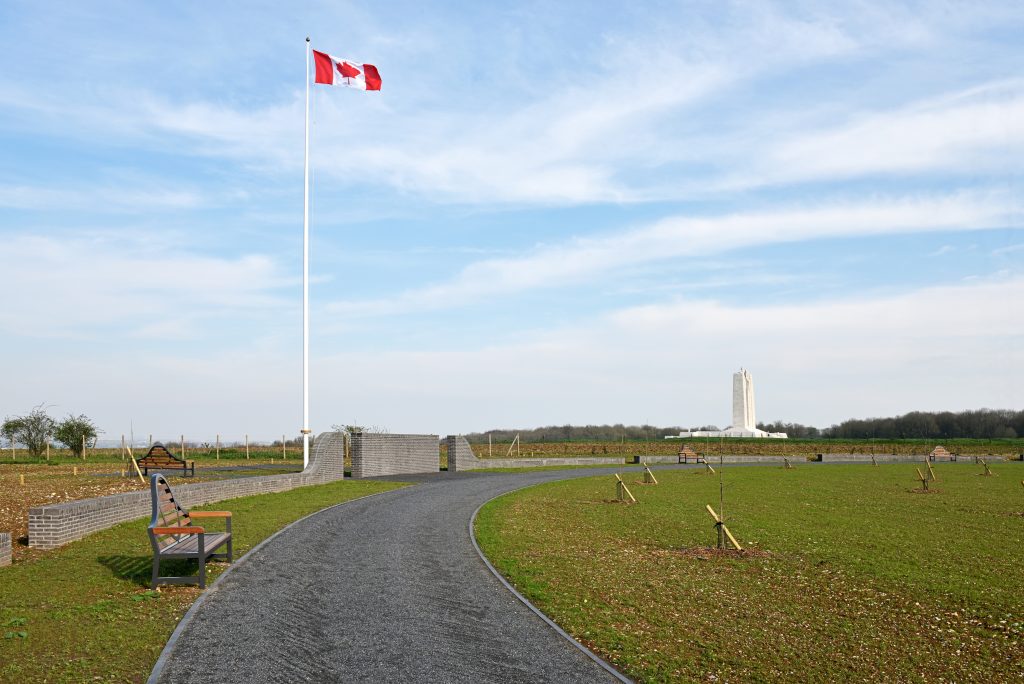 Proudly sponsored by Molson Coors In memory of Captain Percival Molson, M.C. “To you from failing hands we throw The torch; be yours to hold it high.”

The Province of Alberta remembers those Albertans who served their country in the First World War, and subsequent wars.

John and Pattie Cleghorn and Family

The gift of The Peter Cundill Foundation on behalf of F Peter Cundill 1938-2011; a great Canadian, whose deep understanding of history afforded him a profound appreciation of the valour and the gritty determination displayed by his countrymen at Vimy.

In memory of all soldiers who served and gave their lives for our freedom. Fasken

Karen Girling, Bruce MacLellan, Ally and Sara, in memory of those who served.

Hamilton Academy of Medicine in support of Docs on Ice

In memory of their valour and their bravery. The people of Manitoba, Canada will never forget the many who fought and died for our freedom.

The Government of Nova Scotia commemorates Nova Scotians who served, and continue to serve Canada. We shall never forget their service and sacrifice.

Gift of the Rossy Foundation

In memory of Helen Allen Stacey who connected thousands of needy children with adoptive parents and Col. C.P. Stacey, professor and official historian of the Canadian Army in the Second World War. Remembered by their loving families and friends.

To purchase a Centennial Tree and support the Vimy Foundation Centennial Park and educations programs, please contact us at info@vimyfoundation.ca or 416.595.1917. кредит