On March 12, 2019, historian and curator Carla-Jean Stokes of the Historic O’Keefe Ranch and expert digital colourist Mark Truelove of Canadian Colour spoke with guests at the Vancouver Public Library about photography during the First World War. 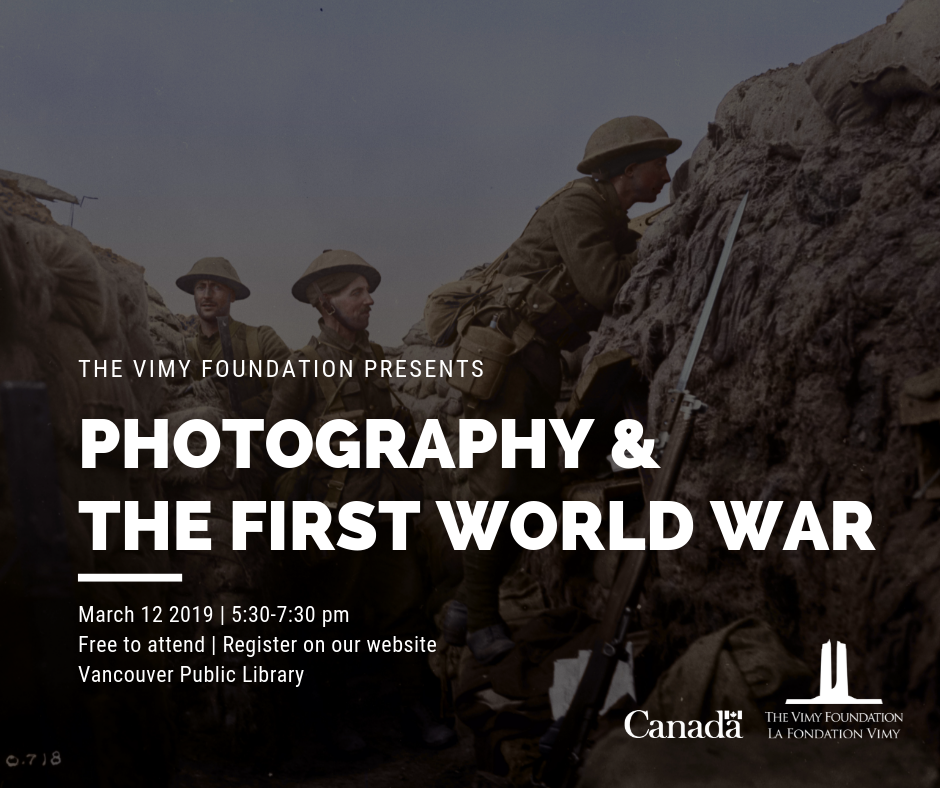 Carla-Jean Stokes has explained how the First World War was different than previous conflicts with the availability of personal cameras: “The First World War was the first major conflict in which large number of soldiers knew how to use a camera—due primarily to the release of the Kodak Brownie in 1900. In 1912, the Eastman Kodak Company introduced the Vest Pocket Kodak camera, and in 1914 it was marketed specifically to soldiers to make photographic souvenirs of their time at the front. Sales of this tiny camera (designed to fit inside a vest pocket) exploded—an estimated one in five Allied officers carried one.”

She started the lecture by explaining why it is important to learn more about the individual photo.

Canada employed three official photographers between 1916 and 1918—Captain Harry Knobel (from April-August 1916); Captain William Ivor Castle (from August 1916-June 1917); and Lieutenant William Rider-Rider (from June 1917-November 1918). Together they produced over 4000 photographs of Canadians at war that were printed in newspapers, sold as souvenirs and put on exhibition. Each of the official photographs has a negative number—usually visible in a corner—that begins with an “O” and is followed by the number it was received by the CWRO (O-1450 was the 1450th photograph received by the organization from the photographers).

The original negatives and prints created by Canada’s official photographers are now housed at Library and Archives Canada. Users can find images online using LAC’s archives search with keywords like “Battle of Vimy Ridge” or “Prisoner of War” or “Canadian War Records Office.”

In 2015, the Vimy Foundation began a unique project: “The First World War in Colour”. We aimed to add colour to digital photographs from the First World War – both the official war photographs held at Library and Archives Canada as well as those from the home front, held by local archives across the country. The digital colourist who worked on this project was Mark Truelove of Canadian Colour.

In this video, he explains why he began colourizing digital photos and why people find it so appealing:

Mark Truelove also describes how he determines what the correct colours in the photograph should be:

“When I first receive a photo the first thing I look at is the overall quality of the image. Many First World War photos are damaged and need to be repaired. This may involve fixing scratches, removing dust particles or correcting for fading. Once that is done I use any description that comes with the photo to figure out the time of year it was taken and if a date is known I will look up the weather on that date, which will help me later with getting the lighting right.

If there are Canadian soldiers in the photo, I will use a variety of sources to find out details of their uniforms i.e. formation patches, cap colours, etc. There are some great resources online for those, but one of my best resources is a book called “Military Antiques and Collectables of the Great War – Canadian Collection” by J. Victor Taboika. For the tricky stuff, I am also fortunate to be able to ask Caitlin Bailey, Curator at the Canadian Centre for the Great War, for her expert opinion.” 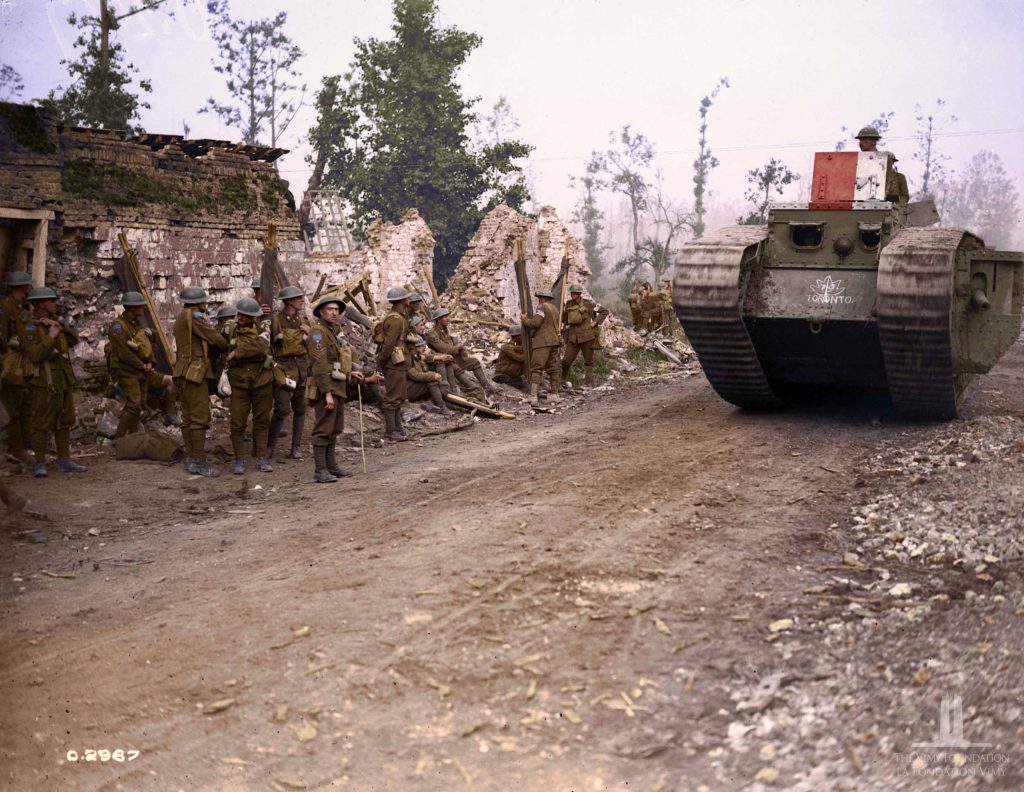 — Nowadays, people are more familiar with programs like Photoshop, and we are familiar with images being adjusted for magazines, for example. Do you think governments and politicians can ‘get away with’ manipulating photos that are shared with the public? Can you think of any recent examples?

—  Imagine you were a war photographer during the First World War, sent over on your own with a camera to document what was taking place on the Western Front. What subjects would you be most interested in? For example, during and after the Battle of Vimy Ridge, photographer Ivor Castle took many photos of the prisoners of war. Why do you think he was more interested in the German prisoners than the Canadian casualties?

—  Colourizing photos, by necessity, requires the alteration of primary source documents. While all attempts are made to be as historically accurate as possible, there is no doubt that the photographs are changed. Use the Vimy 100 in the Classroom guide on ‘Photography in the First World War‘ to analyze the photos and the addition of colour.

Thank you to the Government of Canada and the R. Howard Webster Foundation for their support of the First World War Centennial Speaker Series.