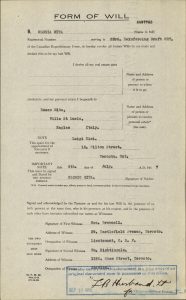 Glorio Mita enlisted in July 1917 as a reinforcement with a Railway Construction and Forestry draft. On 3 October 1917, he joined the 9th Battalion, Canadian Railway Troops in France. Only 16 days later, he died of severe wounds, suffering shrapnel injuries to his head and right shoulder, as well as a compound fracture of his femur. A young, single immigrant from Italy, Glorio had worked as a labourer in Toronto, Ontario before enlisting, making his will out to his parents, who still lived in Santa Lucia, Caserta, Italy. 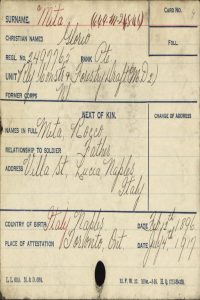