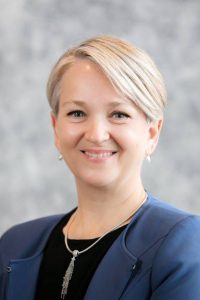 Deborah Wolfe, P.Eng., is the Executive Director, National Committee on Accreditation and Law Schools Programs with the Federation of Law Societies of Canada. The NCA assesses the qualifications of individuals with legal education and professional experience obtained outside of Canada, or in a Canadian civil law program, who wish to be admitted to a common law bar in Canada. Ms. Wolfe also leads the process to approve Canadian common law, law school programs. Ms. Wolfe is the Past Chair of the Association of Accrediting Agencies of Canada, a former President of the Canadian Engineering Memorial Foundation, a charity that encourages girls to become engineers, and a former Chair of the Canadian Network of Agencies for Regulation. Ms. Wolfe was previously with Engineers Canada where she was responsible for the accreditation of undergraduate engineering programs in Canada, and Engineers Canada’s research and foreign credential evaluation programs. Ms. Wolfe is a civil engineer licensed in the province of Ontario and is a former Military Engineer having served with the Canadian Armed Forces.