During the First World War, thousands of Indigenous soldiers served in the Canadian Expeditionary Force.

Like most Canadians, many Indigenous men served in the infantry with the Canadian Corps in the Canadian Expeditionary Force (CEF). Indigenous peoples’ military roles were influenced by their traditional hunting and military skills combined with the racial stereotypes held by recruiting officers and military officials. Many served as snipers or reconnaissance scouts, some of the most hazardous roles in the military. Others served in support units in the CEF, including railway troops, tunneling companies and forestry units.

Despite close camaraderie with non-Indigenous soldiers, their return home was plagued with unequal treatment and marginalization. In 1919, Lieutenant F.O. Loft, a Six Nations veteran who had served with the Canadian Forestry Corps during the war, founded the League of Indians of Canada. It sought to improve conditions on reserves and believed that a unified stance through a political organization could challenge the Indian Act that governed the lives of First Nations people.

Read through his entire service file here at Library and Archives Canada.

Learn more about the contribution of Indigenous Peoples during the First World War from Veterans Affairs Canada. займы онлайн

Camp Borden was founded in 1916, training nearly fifty thousand soldiers for service in The Canadian Expeditionary Force. For many of those soldiers, their first action was during the Battle of Arras, and specifically the Battle of Vimy Ridge.

In 2016 CFB Borden celebrated its centennial year, and through the enduring partnership of the Base, the City of Barrie and the surrounding communities, the Borden Legacy Monument was erected to mark the occasion. Unveiled on June 9th by PM Trudeau, with Mayor Leturque, Mayor of Arras, contributing to our ceremony.

The Borden Legacy Project began in 2014, and in June 2015, sacred soil was removed from the Battlefield at Vimy Ridge and patriated to Canada. This soil symbolically holds the DNA of all those fallen and wounded in the 1917 Battle.

This was one of the important steps that saw the creation of Borden Legacy Park –three distinct pieces that serve to commemorate our past and inspire the future. First, a white and black granite wall, a tribute and inspiration to each and every member of the Canadian Armed Forces that passes through our gates. Etched into the main wall is a powerful tribute to all past and current serving Canadian Armed Forces members: Through these gates the sons a daughters of a grateful nation pass – serving Canada with Honour, Duty, and Courage, so that all may live with Freedom, Democracy, and Justice.

The wall also encases an urn, in which the sacred soil is held. The promise of General Sir Arthur Currie to his troops is etched into the wall that holds the soil, and reads: “To those who fall I say: you will not die, but step into immortality. Your mothers will not lament your fate, but will be proud to have borne such sons. Your names will be revered forever and ever by your grateful country, and God will take you unto himself.”

The second piece of the park is the restored WWI trenches that were used to train infantry soldiers before their departure to the Western Front. Connected to the Legacy Wall via short wooded trail, these trenches are a reminder of the importance of training, and the conditions of the First World War.

Finally, a Bronze Bugler stands in the park, calling to his companions, calling visitors to the monument, and calling to the now-empty trenches that once trained soldiers before they left for battle overseas.

To commemorate the 100th Anniversary of the Battle of Vimy Ridge, a second bugler was created, and will be donated to the Vimy Foundation, to stand in the shadow of Walter Allward’s magnificent monument. The Twin Bugler currently stands in the Hotel de Ville in the City of Arras. 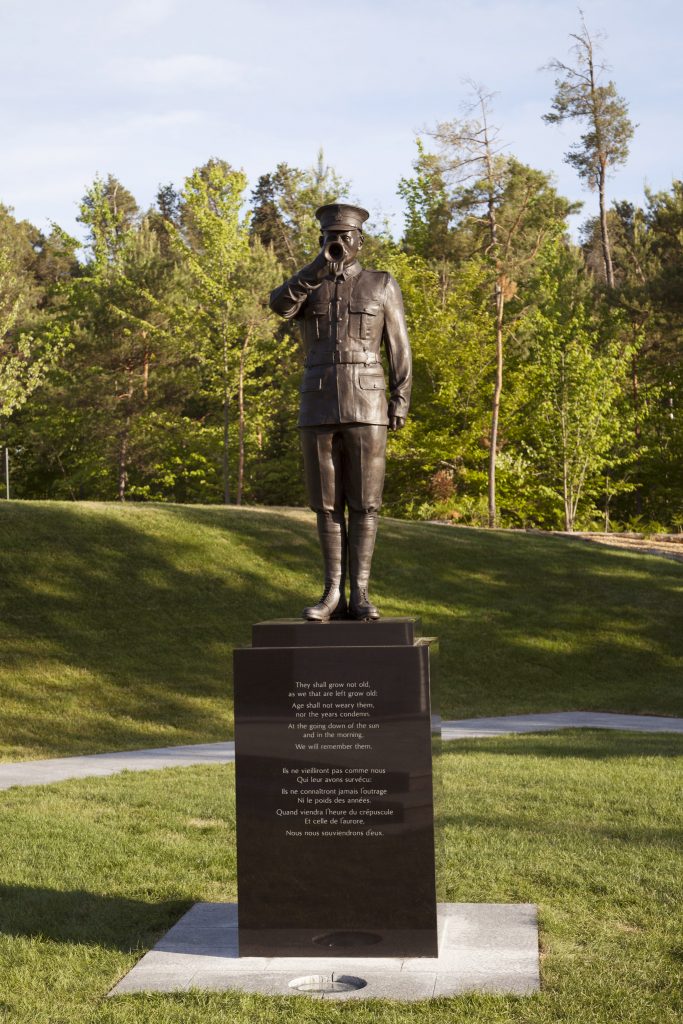